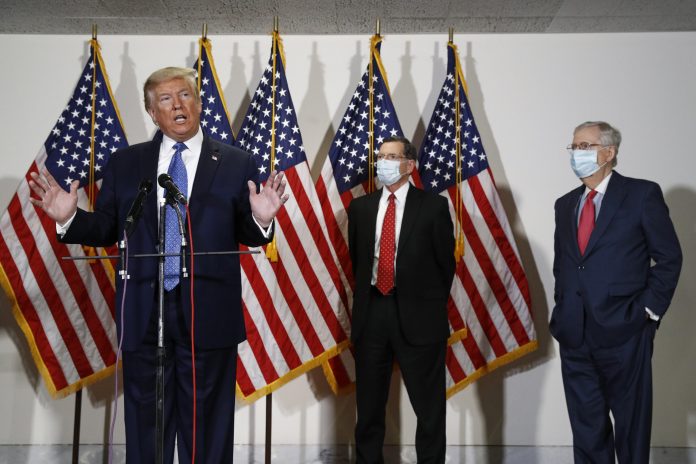 WASHINGTON: President Donald Trump arrived on Capitol Hill on Tuesday for perhaps one of the larger social gatherings still happening in Washington amid the coronavirus — the weekly Senate Republican lunch.

Behind closed doors, Trump was unscripted and freewheeling with the 53 GOP senators. He touted his poll numbers, dismissed rival Joe Biden and implored Republicans to “be tough” against Democrats this fall. Despite House passage of a $3 trillion pandemic aid package, Republicans insisted they’ll wait until June to consider whether more help is necessary.

“We had a great meeting — all of the Republican senators were there,” Trump told reporters afterward.

The private gathering stood in contrast to the scenes playing out in households across the U.S. With social distancing and a shuttered economy, many Americans remain hunkered down at home, juggling children and jobs even as some states begin to reopen. More than 30 million are unemployed.

“They had a giant pep rally and got all fired up to do nothing,” said Senate Democratic Leader Chuck Schumer. “What a day.”

Washington’s power centers are at a political and economic crossroads as Congress and the White House consider next steps in the pandemic response.

While House Speaker Nancy Pelosi led Democrats in approving an aid package last week, Senate Republicans say they’re not interested in providing more funds until they gauge how the $2 trillion in already-approved relief is being spent.

“We need to assess what we’ve already done, take a look at what worked and what didn’t,” said McConnell, R-Ky. “We’ll discuss the way forward in the next couple of weeks.”

As governors plead for funds, Pelosi’s package includes $900 billion to states and cities to shore up their budgets and prevent mass layoffs of state and local government workers. Regional tax revenues have plummeted during the virus outbreak and economic shutdown.

The Democratic bill also provides money for more virus testing, a fresh round of $1,200 rebate checks for cash-strapped Americans and other aid.

Republicans dismiss the House bill as a liberal wish list. They prefer to wait and see if efforts to open up the economy can provide a kick-start and lessen the need for more aid.

Trump’s visit to the weekly luncheon was billed by the White House as an opportunity for the president to thank senators for their work in fighting the virus outbreak and shoring up the economy, officials said.

But as senators convened behind closed doors, the discussion swiftly turned to politics.

Trump’s “enthusiasm” for the campaign against Biden, the presumed Democratic nominee, was clear, senators said.

The president warned them that Democrats are tougher than Republicans and won’t hesitate to go on offense. He revisited well-worn topics including the investigations of Russian interference in the 2016 election and ousted former national security adviser Michael Flynn, according to one Republican who was unauthorized to discuss the private session and spoke on condition of anonymity.

“He admonished all of us to be tough, fight back,” Sen. John Cornyn, R-Texas, told reporters afterward.

Democrats are eager to flip control of the Senate as voters evaluate Trump’s handling of the pandemic crisis. Cornyn said the president explained to the senators, “It’s going to be a pitched battle.”

Trump was joined by son-in-law Jared Kushner, a senior adviser, and new chief of staff Mark Meadows, a former congressman.

The Capitol building remains largely closed with the House away because of health risks, but the Senate returned to session in early May.

The GOP lunch is among the few known gatherings still happening in the nation’s capital, which remains under stay-home orders through June 8. Since March, one GOP senator, several House members and dozens of Capitol Hill workers and staff have tested positive for the virus.

Gone is the buffet spread, with hot and cold offerings. Instead, it’s prewrapped sandwiches and salads, chips and water. The senators now gather in a bigger room across the street from the Capitol rather than the stately one steps from the Senate chamber. Seating is a socially distant three to a table. Many senators wear masks.

Federal guidance from the Centers for Disease Control and Prevention suggests canceling large events of more than 250 people, and canceling those larger than 10 for high-risk populations, including the elderly.

Senate Democrats skip their weekly lunch and convene instead by conference call.

Trump set off alarms when he disclosed this week that he is taking the drug hydroxychloroquine despite grave warnings from health officials and the U.S. government that the anti-malaria drug is unproven to help against against COVID-19 and carries severe health risks, including death.

He did not discuss his decision to take the drug during the private lunch, senators said.

They discussed the COVID-19 response and the economy, according to a person familiar with the meeting who was unauthorized to describe it and spoke on condition of anonymity.

But it did not appear to change Republicans’ outlook that more funds are needed for the pandemic response.

“I don’t see the need right now,” McCarthy told reporters at the Capitol.

Theaters look to Bond and Black Widow to spark 2021 moviegoing

the healing of release and forgiveness 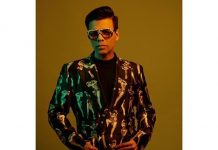 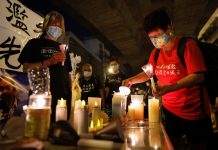 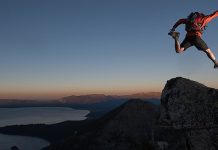 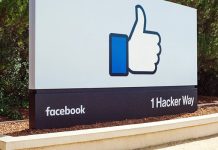