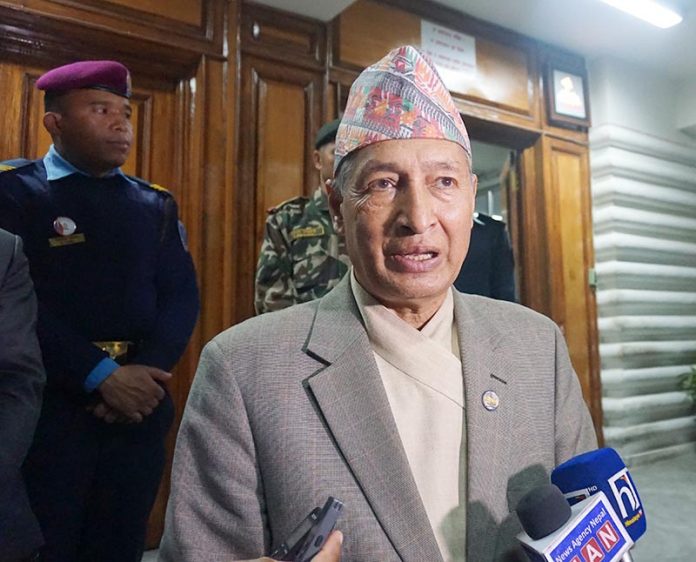 Finance Minister Yubaraj Khatiwada claimed today that the government had announced stimulus package exceeding Rs 210 billion in the budget for fiscal 2020-21 to help businesses cope with unfavourable circumstances created by the COV- ID-19 pandemic and to boost the economy.

Responding to criticism that the government had failed to introduce effective and concrete relief measures to support coronavirus-hit businesses in the new budget announced yesterday, Khatiwada held a virtual press conference saying that relief measures worth around Rs 60 billion in terms of tax relaxation, interest rate subsidy and waiver of different fees — on top of Rs 100 billion in refinancing facility and Rs 50 billion in subsidised loan facility — were announced through the budget.

“Stimulus package is never homogeneous. It is a basket of facilities, including subsidised loan facility, tax waiver, cash subsidy, compensation and other discounts announced in the budget,” the finance minister said during the post-budget discussion held today.

The government has earmarked Rs 100 billion in the budget for refinancing facility at five per cent interest rate to industries/businesses affected by the coronavirus.

Moreover, Rs 50 billion relief fund has been kept aside for special loan facility to industries/enterprises at five per cent interest rate to sustain their businesses.

“Tax subsidies, interest rate subsidy and import subsidy will be given to sectors severely affected by the COVID-19 pandemic and these discounts account for more than Rs 60 billion,” claimed Khatiwada.

Those rendered unemployed will be provided relief worth Rs 3 billion through local levels, he added.

Khatiwada said Rs 4 billion had been set aside to provide relief to the aviation sector and for the Social Security Fund meant for the public.

He added that subsidised loans worth almost Rs 14 billion would be given to businesses as announced in the budget.

In addition to that, businesses will get relief worth Rs 20 billion by taking loans from Nepal Rastra Bank’s refinancing facility at cheaper interest rate, he added.

“Stimulus package is never homogeneous. It is a basket of facilities, including subsidised loan facility, tax waiver, cash subsidy, compensation and other discounts announced in the budget”

US coronavirus cases surpass 7 million as Midwest outbreak flares up