The UK’s legal loopholes mean that political parties can mislead on social media without censure from regulators.

Offline, UK law mandates that a political party must put their name on their leaflets in an “imprint”, and there are strict bans on TV political advertising. The idea to prevent elections being bought or manipulated, factors that helped to promote political integrity.

But these laws have never extended to the big business of online ads, and 2019 is being dubbed “the digital election” in some media circles.

“As you have seen in this election you can put somebody else’s name on what you are producing and, legally at least, be on safe ground,” said Will Moy, chief executive of independent fact-checking charity Full Fact.

“As a country we have decided to outsource decisions about the election rules we have, to the CEOs of American internet companies,” he told a concerned audience at the Institute for Government think tank, based in London. “That is an extraordinary, and an extraordinarily irresponsible, thing to have done.”

A week before last, the Conservatives, Liberal Democrats and Labour campaigns invested almost half a million pounds, £425,485 between them, on Facebook advertising and that was just seven days, plus tens of thousands each week on Google ads.

Then, the pro-transparency group Who Targets Me reported last week that Labour and the Lib Dems have already surpassed the money they spent on 2017’s election.

The UK’s watchdog for democracy, the Electoral Commission, has repeatedly asked for electoral laws to be updated for the online world. It first called for reform from a Labour government in 2003, before Facebook was even built. Labour failed to act, as have successive governments,

In the absence of any such action, sharp tactics prevail. On November 19th the Conservative party renamed themselves Fact Check UK on Twitter during a broadcast leaders debate. Twitter took no retributive action.

The Conservatives later produced a ‘“Labour manifesto” website to critique their opposition, and paid to push it up Google rankings. They also doctored a broadcast interview of Keir Starmer to make it look as if he failed to answer a question on Brexit. Jo Swinson’s Liberal Democrats have not covered themselves in glory either, falsely attributing a pro Liberal Democrat quote by their own leader to The Guardian.

Tides may be turning, however. Following a Defence Committee inquiry on hybrid warfare (propaganda), another parliamentary inquiry on disinformation, the Netflix documentary The great hack being viewed around the world and national soul-searching after the Brexit vote, digital democracy is a major public concern.

Despite this, Boris Johnson’s cabinet snubbed advice of Conservative MP Damian Collins, chair of Parliament’s Sub-Committee on Disinformation, to implement emergency legislation to protect the “integrity” of this election.

This is, in Moy’s view, “a massive gap in the scrutiny and integrity of our electoral system”.

“And of course, we are wide open to foreign interference” he added. “At the moment, we have not seen credible reports of serious levels of hostile state action in this election”, but ‘this is a standard part of the repertoire of certain states”.

Only a handful of people are failing to take that seriously. “Even Facebook has called for Parliament to act in this area, and yet they haven’t,” said Moy.

“The long-term threat to the electoral integrity of the United Kingdom is the fecklessness of successive Governments and Parliaments who are well aware of and who have explicitly acknowledged the risk here, but have done nothing to address it.”

He told Computer Weekly: “The law – I don’t think there’s any serious doubt about this – is not fit for purpose. But actually, it’s worse than that because there is no real legal sanction for breaking it…”

“A bad participant will try to bypass it and just pay any immaterial fines that come their way. The effect is that the law creates a tilted playing field that helps the worst and hinders the best.”

Maugham added that there are issues with financial transparency: “It’s incredibly easy – as matters stand – to mask the true source of donations. If you want to spend money trying to influence politics in the UK the only real control on your identity being revealed is your conscience. The law operates, in reality, no control at all.”

The fear voiced about “dark money” and political interference is that it is to influence the outcome of elections. That is not necessarily the case, as Liz Carolan, CEO of Digital Action, explains. She oversaw the ‘transparent referendum project’ on abortion in Ireland, in which 900 volunteers scraped electoral ads.

“What we saw in Ireland was campaigns being set up which are not connected to any of the [official] campaigns. Mimicry or impersonation of neutral accounts, but which were entirely biased. The potential is for it to be used as part of voter suppression tactics.”

Ms Carolan said: “We often talk about these things as if actors have a goal of influencing the outcome of an election. That is sometimes the case but it is quite often not. During the referendum in Ireland, we saw organisations in the US targeting Irish people with signs telling them to vote one way or the other.

“We were able to escalate it with Facebook and Google but what found that those same organisations were using the news reports of the interference in their fundraising domestically.

“So for them, interfering in the Irish referendum process was not necessarily about influencing our constitution, it had domestic financial motives … Transparency in the system enables us to figure these things out.”

Responding to all these concerns, the Electoral Commission’s chair Sir John Holmes said the law was “not fit for purpose”.

However, he cautioned against “moral panic” about it, and asserted that the UK’s democracy can be trusted: “Dark money and dark forces are sometimes discussed without evidence. That’s not to say the risks aren’t there, but a lot of it is perfectly legitimate campaigning as well.”

He said he supported “anti-money-laundering style” laws to prevent the true source of political donations being masked further hopes for reform rest on updates to the UK’s White paper on online harms, and on a Private Members’ Bill to combat disinformation, brought in the Lords.

Sir Holmes said this is a subject whose “time has come”. The Electoral Commission has recommended that companies that wish to donate to parties should only be able to do so with the income raised from their UK-based profits. They also continue to push for transparency of the funders on digital campaigns.

A spokesman for the Electoral Commission said: “Imprints, details that show who paid for campaign material, who it promotes and who printed it, on printed campaign material have long been a legal requirement.

“The same law does not apply to digital campaign material. It is vital that voters have transparency in campaigns and that they can see who is trying to influence their vote, the same way they can for printed material.”

Lockdown Day 61: Some Glimpses from around the City 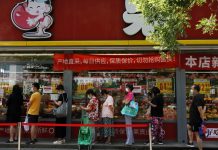 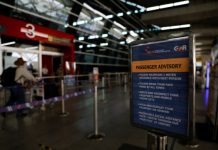 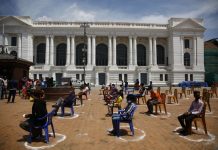