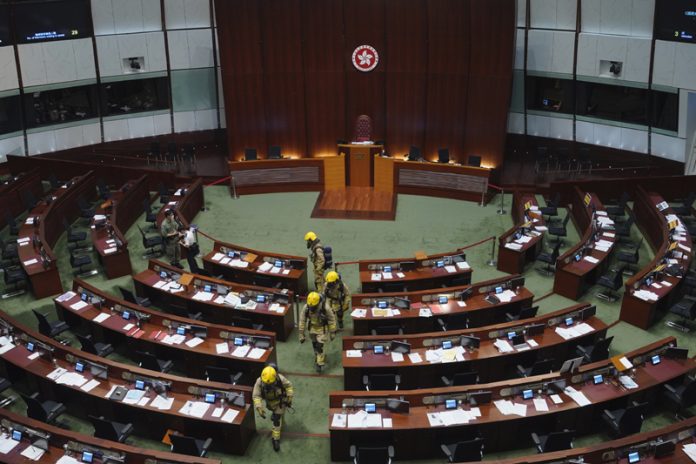 The legislature’s president, Andrew Leung, suspended the meeting minutes after it began and ejected Eddie Chu for holding up a sarcastic sign about a pro-Beijing lawmaker that read “Best Chairperson, Starry Lee.”

A second pro-democracy lawmaker was ejected for yelling after the meeting resumed, and then a third after rushing forward with a large plastic bottle in a cloth bag that spilled its brownish contents on the floor in front of the president’s raised dais.

Firefighters wearing gas masks check the main chamber of the Legislative Council after a pro-democracy lawmaker hurled an object during the second day of debate on a bill that would criminalize insulting or abusing the Chinese anthem in Hong Kong, Thursday, May 28, 2020. Three pro-democracy lawmakers were ejected from Hong Kong’s legislative chamber Thursday morning, disrupting the start of Thursday’s debate on the contentious bill. Photo: AP

“We have wanted to use any method to stop this national anthem law getting passed by this legislature, which is basically controlled by the Chinese Communist Party, because the law is just another way of putting pressure on Hong Kong people,” Chu said outside the chamber.

In Beijing, China’s national legislature was set to ratify a proposal later Thursday to impose a national security law on Hong Kong, a Chinese territory that is supposed to have a high degree of autonomy under a “one-country, two systems” framework.

The city’s pro-democracy opposition sees both the security legislation and the anthem law as assaults on that autonomy, and the US has called on China to back off on the security law.

US Secretary of State Mike Pompeo notifed Congress on Wednesday that the Trump administration no longer regards Hong Kong as autonomous from mainland China, setting the stage for the possible withdrawal of the preferential trade and financial status the US accords the former British colony.

Hong Kong activist Joshua Wong, who rose to prominence as a student leader during 2014 pro-democracy demonstrations, applauded the US announcement.

Sanctions or the freezing of Hong Kong’s special economic status would “let Beijing know it is a must to completely withdraw and stop the implementation of the national security law,” Wong said.

Chinese foreign ministry spokesperson Zhao Lijian said ahead of Pompeo’s announcement that China would take necessary steps to fight back against any “erroneous foreign interference in Hong Kong’s affairs.”

Chu, the ejected Hong Kong lawmaker, said the legislature’s president had objected to his placard calling Lee an “illegal chairperson” during Wednesday’s first day of debate, so he made a new one that called her the best chairperson instead.

Lee was recently elected chair of a key committee that sent the anthem bill to the full legislature for consideration. Her election, which the pro-democracy opposition contends was illegal, ended a monthslong filibuster that had prevented the committee from acting on the bill and other legislation.

Chu was carried out by security guards, even as fellow pro-democracy lawmakers protested his removal and tried to stop it.

After the meeting restarted, pro-democracy lawmaker,Ray Chan started yelling as Leung explained his decision to remove Chu, and the legislative president suspended the meeting again and ordered Chan ejected, too.

Other pro-democracy lawmakers surrounded Chan, who then hid under a table, as security officers tried to remove him. He eventually was carried out the officers.

A longer suspension followed the ejection of Ted Hui, who kicked the plastic bottle toward the president’s dais after security officers tussled with him and it fell from his hands.

Members left the chamber, security guards sprayed disinfectant and cleaning workers arrived to wipe the carpet. Then a group of firefighters in full protective gear entered and collected evidence. They appeared to take samples from the floor using swabs.

Hui later described the contents as a rotten plant, and said he wanted Leung to feel and smell the rotting of Hong Kong’s civilization and rule of law, and of the “one country, two systems” framework that democracy activists feel is under attack by China’s ruling Communist Party.

“I wanted him to taste it, unfortunately it (fell) on the ground because I was hit by security guards,” he said.

Hui rushed toward Leung as pro-democracy lawmakers were demanding that the legislature’s president explain which rules of procedure banned sarcastic placards, and then all held up or displayed the same “Best Chairperson, Starry Lee” sign.

Gravitational action of sun and moon influences behaviour of animals and... 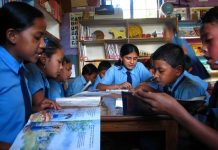 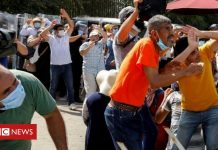 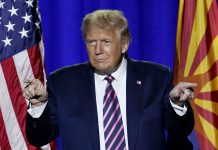 US vote to shape how world warms as climate pact exit...