The Office of the Attorney General has urged the government to establish a dedicated agency or unit for crime investigation.

The annual report (2019-20) of the OAG submitted to President Bidhya Devi Bhandari yesterday had underlined the need to create a specialised agency for effective, scientific and evidence-based investigation of criminal offences in the wake of implementation of the new penal (civil and criminal) codes.

“Though the OAG has been in favour of creating a dedicated and specialised crime investigation agency for long, this need has been further justified with the implementation of the codes,” read an excerpt of the report.

As Nepal Police is the only agency tasked with carrying out investigation into criminal cases and maintaining peace and security simultaneously, it is sometimes obliged to accord higher priority to law and order in society than the crime investigation.

“This situation is likely to result in destruction of criminal evidences, weaker investigation and escape of crime suspects. In this context, it is high time the government takes the necessity of a dedicated crime investigation body seriously.

The OAG has also called on the government to do more for protection of crime victims and witnesses from the stage of investigation to adjudication and judgement implementation in order to enhance people’s trust in criminal justice system.

“For this, it is necessary to formulate a witness protection law and ensure effective implementation of the existing Crime Victim Protection Act,” it suggested.

Similarly, the government has been urged to make forensic science laboratories well-equipped and to expand them to the provincial levels for testing of physical evidences related to criminal offences. “Collection and scientific testing of physical evidences play a vital role in investigation and prosecution of criminal cases in which the government acts as plaintiff. Delay in testing physical evidences and compulsion to file criminal cases without forensic test report due to lack of necessary resources have badly affected investigation and prosecution procedures.

The OAG has also suggested that the government enter into mutual legal assistance and extradition treaties with various countries to ensure that crime suspects and convicts hiding abroad are brought home for prosecution and execution of court verdicts.

US infection rate rising outside New York as states open up 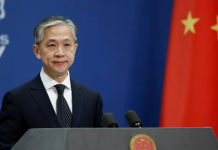